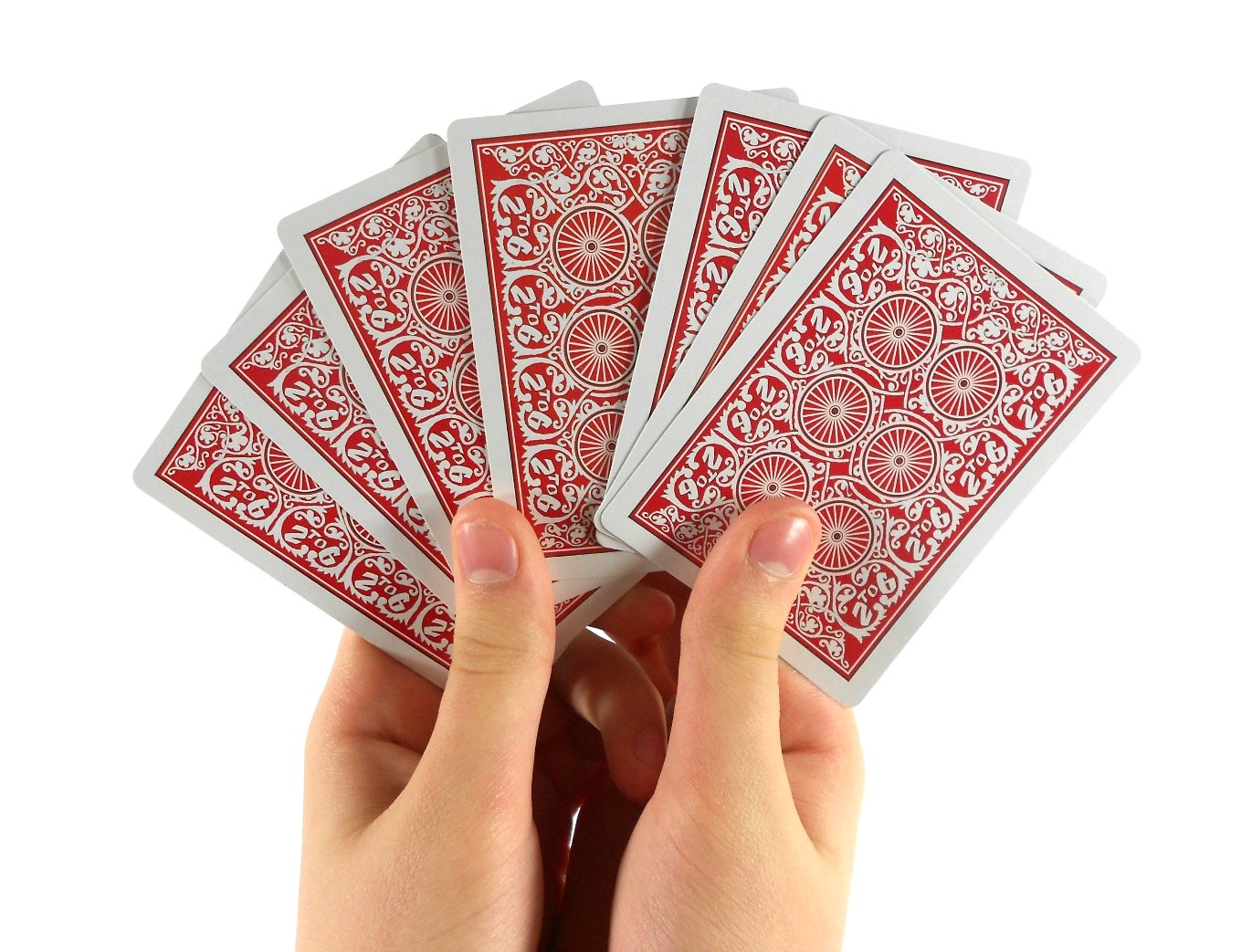 Just as reading lots of books is vital to become a good writer, playing a ton of games will make you a better game designer. You don’t need $3,000 collection of board games to explore interesting mechanics and get those creative juices flowing though. Here are six unique games you can play using just a standard deck of playing cards.

Dating back to at least the 1950s, GoPS stands for “Game of Pure Strategy.” Instead of being dealt a random hand as in most card games, in GoPS each player is given a whole suit Ace through King to be their hand. Players then select and simultaneously reveal cards to compete for prize cards with the winner being the player that revealed the higher card. Basically, GoPS is like War (which is barely a game) but with complete player knowledge and complex decision making. This leads to a quick but strategic duel of planning and bluffing very similar to Brave Rats.

Another game that is superficially similar to War (in that mean angry big cards kill and eat helpless smaller cards), Capture the Commander is War combined with another popular children’s game Memory. The result is a surprisingly deep game that will tax your brain in ways similar to Stratego. Players lay out formations of cards in rows at random face down then take turns comparing one selected card from each player’s formation. The lower card is removed from the game each time creating gaps in the formations. The winner is the first to work their way to their opponent’s back row and defeat their commander.

This game is on this list representing the whole genre of auction/bidding games (which I always enjoy). Red Carpet is similar to Poker except that cards are auctioned off to form the players’ hands. You can use poker chips or pennies as currency, but since this list is games you can play with only a deck of cards, I recommend you use the rules for spending unused cards as cash. The scoring system is a little obtuse, and the creator admits that this game hasn’t been playtested, but it is definitely worth a look.

This game feels very much like Magic The Gathering and other modern Collectible Card Games, except of course it uses only a standard deck of cards, and it was developed back in the 70s, up to 20 years before the release of Magic. In Cuttle, players take turns playing cards and trying to play enough number cards onto the board to equal 21 points. Things aren’t as simple as it sounds though as each different card type has a special ability that can be used. These powers allow you to draw more cards, steal points from your opponent, force your opponent to play with their hand revealed, and other very Collectible Card Game-y effects. These powers make Cuttle quite complex and you’ll have to play for a while if you want to memorize each card’s power, but the fact that you can buy a deck of 52 cards for less than the cost of a Magic booster pack is a big point in Cuttle’s favor.

This might be the strangest game on the list. The only thing I can think to compare Towers to is competitive Tetris but with playing cards. Players take turns building towers and bridges to connect them by playing low value cards on top of higher cards. If two cards of the same value ever occupy the same level of the structure, the pair is destroyed. This can cause a chain reaction where many other tower and bridge cards come tumbling down to their doom. The winner is the player who destroyed the most cards at the end of the game. If you like videogames of the puzzle genre at all, you should try Towers, even though the rules will take a few readings to wrap your head around.

Eleusis was first created in 1956 and became widely known when it was discussed in a column in Scientific American a few years later. A game very much like Eleusis was published under the title Genius Rules, but the original game, and Eleusis Express which I’m linking here, use only two standard decks of cards. Yeah, I know, I’m breaking the “just a deck of cards” rule for this entry, but this game is worth the marginally higher price of admission.Eleusis is meant to simulate the scientific process. One player creates a rule and sets out a few starter cards in a row that follow the rule (the rule usually being a pattern like “odd, odd, even” or “red, black, red, black, black” or some combination of colors, values, math, etc.).  The other players attempt to understand the rule by playing cards from their hand into row. The rulemaster will then judge if the played card follows the rule and can stay in the line, or does not and must be removed. There is some scoring at the end, but you can ignore that. The game is mainly about trying to deduce the devious rulemaster’s pattern by repeatedly testing your own hypotheses.

These are my picks for unique card games, but there are many more out there. You’ll notice many of the rules links were from Pagat.com, a massive online compendium of card and domino games. I urge everyone interested in game mechanics to spend some time wandering through Pagat’s big list o’ games. You might find a great idea for your next game, or maybe just a wacky variant of Crazy Eights that you really want to try.